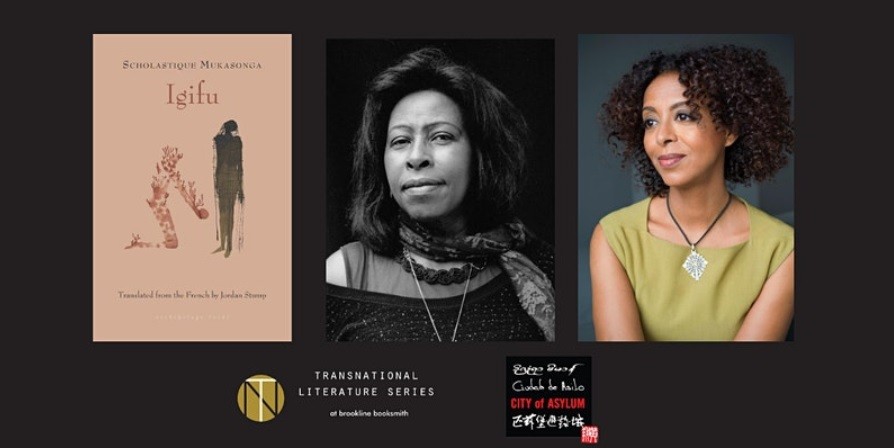 Join the Transnational Literature Series at Brookline Booksmith and City of Asylum Bookstore for a virtual event with Scholastique Mukasonga and Maaza Mengiste to discuss Mukasonga’s latest book, Igifu.

Igifu is a collection of Scholastique Mukasonga’s autobiographical stories, which rend a glorious Rwanda from the obliterating force of recent history, conjuring the noble cows of her home or the dew-swollen grass they graze on.

In the title story, five-year-old Colomba tells of a merciless overlord, hunger or igifu, gnawing away at her belly. She searches for sap at the bud of a flower, scraps of sweet potato at the foot of her parent’s bed, or a few grains of sorghum in the floor sweepings. Igifu becomes a dizzying hole in her stomach, a plunging abyss into which she falls. In a desperate act of preservation, Colomba’s mother gathers enough sorghum to whip up a nourishing porridge, bringing Colomba back to life. This elixir courses through each story, a balm to soothe the pains of those so ferociously fighting for survival.

Translated from French by Jordan Stump.

Born in Rwanda in 1956, Scholastique Mukasonga experienced from childhood the violence and humiliation of the ethnic conflicts that shook her country. In the aftermath of the brutal genocide of the Tutsi, Mukasonga learned that 37 of her family members had been massacred. Her first novel, Our Lady of the Nile, was adapted into a film by Atiq Rahimi in 2019. The New York Times named her memoir Cockroaches one of the “50 Best Memoirs of the Past 50 Years.” In 2019, The Barefoot Woman was a finalist for the National Book Award for Translation.

Moderator Maaza Mengiste is the author of the novels, Beneath the Lion’s Gaze, selected by the Guardian as one of the 10 best contemporary African books; and The Shadow King, a finalist for the LA Times Books Prize, and one of New York Times’ Notable Books of 2019 and TIME’s 100 Must-Read Books of 2019. She is the recipient of an American Academy of Arts and Letters award, the Premio il ponte, and fellowships from the Fulbright Scholar Program, the National Endowment for the Arts, Creative Capital, and LiteraturHaus Zurich. Her work can be found in The New Yorker, New York Review of Books, Granta, the Guardian, The New York Times, Rolling Stone, and BBC, among other publications.

About our bookstore partner:

About the Transnational Literature Series at Brookline Booksmith

The Transnational Series focuses on stories of migration, the intersection of politics & literature, and works in translation and is supported by the independent bookstore Brookline Booksmith. Subscribe to the Transnational Series newsletter for information on upcoming events, book recommendations, and more.